Smoking In Cars With Children Will Be Banned

Smoking in cars with children will be banned in England, under new laws put forward by the government.

The regulations laid before Parliament propose banning smoking in cars containing under 18s. A fine of £50 will be issued to people who smoke or who fail to prevent another person smoking.

MPs will vote on the plans before the election – and if they are passed the change in law will come into force on 1 October 2015.

The move comes after a free vote in Parliament in February gave ministers the power to introduce the law, although it did not compel them to.  Dr Hilary Wareing says children exposed to second-hand smoke in cars are more likely to have respiratory infections.

“The only effective way to protect children is to prevent them breathing second-hand smoke and our plans to stop smoking in cars carrying children will help us to do this.”

Why Stop Smoking in cars?

The UK Government wants to make it an offence to sell “nicotine inhaling products” to anyone under the age of 18, except where it is used as licensed medicine.

Health minister Jane Ellison said: “Second-hand smoke is a real threat to children’s health and we want them to grow up free from the risks of smoking.

“The only effective way to protect children is to prevent them breathing secondhand smoke and our plans to stop smoking in cars carrying children will help us to do this.”

The World Health Organisation found that second-hand smoke is a “real and substantial threat to child health”, the DoH said.

The British Lung Foundation estimates that 430,000 children are exposed to second-hand smoke in their family car every week.

Martin is the first National Guild of Hypnotists Board Certified Hypnotist and Certified Instructor in Ireland.  For hypnotism services in Cork, and Ireland, sometimes it’s better to talk to a real expert and trusted authority in the hypnotism profession. If you would like to discuss our Stop Smoking for drivers programme please contact Martin Kiely Hypnosis Centre today for further information or to discuss your hypnotism service options. 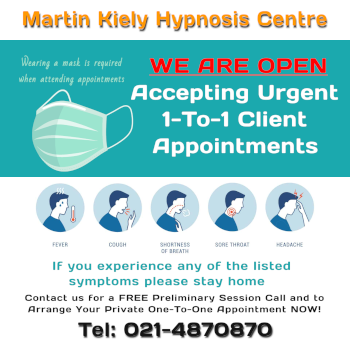